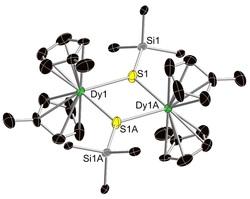 A major research theme in our group is the study of lanthanide single-molecule magnets (Ln-SMMs). SMMs are molecules that possess a magnetic memory, however the majority of such materials function only at very low temperatures. SMMs have been proposed for applications in fields such as quantum computing and molecular spintronics, however these goals are some way from being achieved because of the low-temperature nature of SMM properties. In the meantime, the fascinating fundamental properties of Ln-SMMs keep us busy. In particular, we are interested in applying organometallic synthesis to develop Ln-SMMs based on ligand environments that are unconventional in molecular magnetism, and in particular we are interested in working with soft-donor ligands. In 2010, we reported the first ever SMM (irrespective of the type of metal) to be based on an organometallic ligand environment. We subsequently followed up this work with the first sulphur-bridged SMM. In addition to the experimental studies, we collaborate with the group of Prof. Liviu Chibotaru (Leuven, Belgium), whose ab initio calculations provide invaluable insight into the electronic structure of our organometallic Ln-SMMs.
Relevant publications: (1) Chem. Rev. 2013, 113, 5110. (2) Organometallics 2013, 32, 1224. (3) Chem. Comm. 2013, 49, 901. (4) Angew. Chem. Int. Ed. 2012, 51, 6976. (5) Chem. Comm. 2012, 48, 1508. (6) Chem. Eur. J. 2010, 16, 4442. 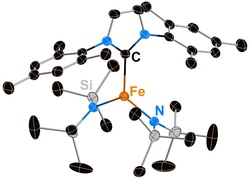 Expensive late transition metals such as ruthenium and palladium have extensive coordination chemistry with NHC ligands. In contrast, the NHC chemistry of the cheap, earth abundant metal iron is underexploited. We are particularly interested in the structure, bonding and reactivity of low-coordinate iron complexes containing NHC ligands. In addition to the intrinsic interest in these compounds, many groups have reported fascinating applications in catalysis and bio-mimetic chemistry. In 2011, we reported the first three-coordinate iron-NHC complexes (e.g. see image left). Three-coordinate NHCs should possess varied reactivity in a range of settings. The recent award of a post-doc grant to the RAL group from the European Union (beginning August 2013) will allow us to pursue these studies: further details forthcoming...
Relevant publications: (1) J. Am. Chem. Soc. 2013, 135, 13338. (2) Chem. Comm. 2012, 48, 3579. (3) Chem. Comm. 2011, 47, 10623. (4) Inorg. Chem. 2011, 50, 2521. 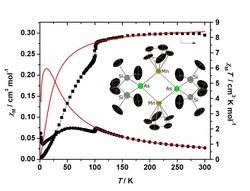 We have a longstanding interest in cyclopentadienyl chemistry of manganese(II). Our work here is mainy concerned with magnetic phenomena such as spin crossover (SCO), and exchange coupling mediated by heavier p-block elements such as phosphorus and arsenic. When I have more time, I'll write some more about it, but in the meantime enjoy the image on the left, which shows two-step SCO between the high-spin (S = 5/2) and intermediate-spin (S = 3/2) states of Mn(II) in an arsenide-bridged dimer. If you look very closely, you can see hysteresis in the SCO just below 100 K.

Structure, bonding and reactivity of allyl and pentadienyl carbanions 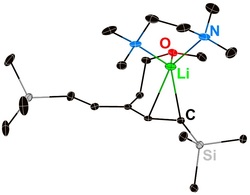 We are interested in the synthetic applications of silyl-substituted allyl and pentadienyl carbanions, which we use for two general purposes. Firstly, silyl substituents can be used to stabilize otherwise highly reactive transition metal allyl complexes, thus enabling investigations of a class of compound that suffers from profound thermal instability. Secondly, we are interested in developing silyl-allyl carbanion complexes of the s-block metals in regio- and stereo-selective organic synthesis: the selectivity with this chemistry is achieved through the use of pendant Lewis-base donor groups, a class of ligand that we introduced into s-block chemistry. As an extension of this work, we have recently reported the first donor-functionalized pentadienyl ligands (see structure left), and have begun to investigate the applications of these compounds in the selective functionalization of pentadienyl-silanes (collaborations with Prof. Jonathan Clayden, Manchester, and Prof. Matthias Bickelhaupt, VU-Amsterdam).